Bodrum (Turkish pronunciation: [ˈbodɾum]) is a port city in Muğla Province, southwestern Turkey, at the entrance to the Gulf of Gökova. Its population was 35,795 at the 2012 census, with a total of 136,317 inhabitants residing within the district’s borders. Known in ancient times as Halicarnassus, the city was once home to the Mausoleum at Halicarnassus, also known as the tomb of Mausolus, one of the Seven Wonders of the Ancient World.

The city was founded by Dorian Greeks. It later fell under Achaemenid Persian rule and became the capital city of the satrapy of Caria. Mausolus ruled Caria from here, and after his death in 353 BC, his wife Artemisia built a tomb, called the Mausoleum, for him. Macedonian forces laid siege to the city and captured it in 334 BCE. After Alexander‘s death, the city passed to successive Hellenistic rulers and was briefly an independent kingdom until 129 BCE, when it came under Roman rule. A series of natural disasters and repeated pirate attacks wreaked havoc on the area, and the city lost its importance by the time of the Byzantine era. The Knights Hospitaller arrived in 1402 and used the remains of the Mausoleum as a quarry to build Bodrum Castle. The castle and its town became known as Petronium, whence the modern name Bodrum. After the conquest of Rhodes by Suleiman the Magnificent in 1522, the town fell under Ottoman control as the Knights Hospitaller relocated to Europe.

By the 20th century, the city’s economy was mainly based on fishing and sponge diving, but tourism has become the main industry in Bodrum since the late 20th century. The abundance of visitors has also contributed to Bodrum’s retail and service industry. Milas–Bodrum Airport and Kos International Airport are the main airports that serve the city. The port has ferries to other nearby Turkish and Greek ports and islands, Kos being the most important. Most of the public transportation in the city is based on local share taxis and buses.

The modern name Bodrum derives from the town’s medieval name Petronium, which has its roots in the Hospitaller Castle of St. Peter (see history).

In classical antiquity, Bodrum was known as Halicarnassus (Ancient Greek: Ἁλικαρνασσός,[5] Turkish: Halikarnas), a major city in ancient Caria. The suffix -ᾱσσός (-assos) of Greek Ἁλικαρνᾱσσός is indicative of a substrate toponym, meaning that an original non-Greek name influenced or established the place’s name. It has been proposed that the -καρνᾱσσός (-carnassos) part is cognate with Luwian word “ha+ra/i-na-sà”, which means fortress.[6] If so, the city’s ancient name was probably borrowed from Carian, a Luwic language native to pre-Greek Western Anatolia. The Carian name for Halicarnassus has been tentatively identified with 𐊠𐊣𐊫𐊰 𐊴𐊠𐊥𐊵𐊫𐊰 (alos k̂arnos) in inscriptions.[7]

Halicarnassus (Ancient Greek: Ἁλικαρνᾱσσός, romanized: Halikarnassós, or Ἀλικαρνασσός Alikarnassós; Turkish: Halikarnas), was an ancient Greek city at the site of modern Bodrum in Turkey. Halicarnassus was founded by Dorian Greeks, and the figures on its coins, such as the head of Medusa, Athena, Poseidon, and the trident, support the statement that the mother cities were Troezen and Argos.[8] The inhabitants appear to have accepted Anthes, a son of Poseidon, as their legendary founder, as mentioned by Strabo, and were proud of the title Antheadae. The Carian name for Halicarnassus has been tentatively identified with Alosδkarnosδ in inscriptions.

In an early period, Halicarnassus was a member of the Doric Hexapolis, which included Kos, Cnidus, Lindos, Kameiros, and Ialysus; but it was expelled from the league when one of its citizens, Agasicles, took home the prize tripod that he had won in the Triopian games instead of dedicating it according to custom to the Triopian Apollo. In the early 5th century, Halicarnassus was under the sway of Artemisia I of Caria (also known as Artemesia of Halicarnassus[9]), who made herself famous as a naval commander at the battle of Salamis. Little is known of Pisindalis, her son and successor; but Lygdamis, the tyrant of Halicarnassus, who next attained power, is notorious for having the poet Panyasis put to death and forcing Herodotus, possibly the most well-known Halicarnassian, to leave his native city (c. 457 BC).[10]

Surviving substructures and ruins of the Mausoleum, one of the Seven Wonders of the Ancient World. 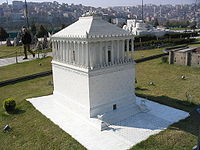 The city later fell under Persian rule. Under the Persians, it was the capital city of the satrapy of Caria, the region that long afterward constituted its hinterland and of which it was the principal port. Its strategic location ensured that the city enjoyed considerable autonomy. Archaeological evidence from the period, such as the recently discovered Salmakis (Kaplankalesi) Inscription, now in Bodrum Museum of Underwater Archaeology, attests to the particular pride its inhabitants had developed.[11]

Mausolus ruled Caria from here, nominally on behalf of the Persians but practically independently, for much of his reign from 377 to 353 BC. When he died in 353 BC, Artemisia II of Caria, who was both his sister and his widow, employed the ancient Greek architects Satyros, Pythis, and the sculptors Bryaxis, Scopas, Leochares, and Timotheus to build a monument and a tomb for him. The word “mausoleum” derives from the structure of this tomb. It was a temple-like structure decorated with reliefs and statuary on a massive base. Today only the foundations and a few pieces of sculpture remain.

Alexander the Great laid siege to the city after his arrival in the Carian lands and, together with his ally, Queen Ada of Caria, captured it after fighting in 334 BC. After Alexander’s death, the rule of the city passed to Antigonus I (311 BC), Lysimachus (after 301 BC), and the Ptolemies (281–197 BC) and was briefly an independent kingdom until 129 BC, when it came under Roman rule. A series of earthquakes destroyed much of the city, as well as the great Mausoleum, while repeated pirate attacks from the Mediterranean wreaked further havoc on the area. By the time of the early Christian Byzantine era, when Halicarnassus was an important bishopric, there was little left of the shining city of Mausoluos.[12]